This will be more of a “look what we did” post rather than a how-to. I just dug up these pictures from several weeks ago and sorta went, “oh yeah, we did that too!”. But if you’re thinking of making a sandbox for your child, maybe this will give you some ideas.

(Since Baby Brownie isn’t really a baby anymore, I’m just going to call her Brownie from now on.)

So, Brownie likes dirt (doesn’t your 2-year-old too?). And our yard has a lot of it. We’ve been in the midst of installing irrigation and other landscaping projects for a while, so there are literally big piles of dirt all over the yard. So to indulge her love for playing in the dirt, while at the same time keeping her clothes a LITTLE cleaner, we decided to build her a sandbox.

I’ve heard horror stories about sandboxes and cat poop though, so it had to be a covered one!

(Please ignore the neon green pool. We had a little algae overgrowth that we took care of right after we took this pic!) 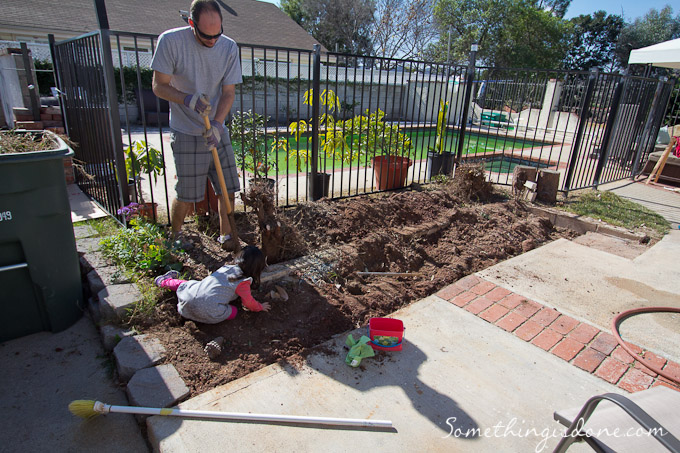 We started by digging up the area we were going to make the sandbox in. There used to be a fence here with a cinder-block footing, so we were able to use some of the concrete footing as 2 of the walls of the sandbox. For the other two walls, Chris put in some 4×4 footings in the corners and nailed on a couple of 2×6 redwood planks. Then, he used redwood fence pickets and cut them down to size to make the edge framing and the lid. He lined the hole with a weed-resistant barrier before filling it with playground sand.

As you can see, the lid is super simple — just a row of fence pickets held together by a couple of stringers. We sanded down the redwood (which is quite splintery) quite a bit and then sealed it with our homemade Danish oil mixture (1:1:1 Oil-based poly, mineral spirits, and boiled linseed oil).

The below pictures were taken about a month later, so you can see the red color of the wood has faded quite a bit.

When the lid is open, we secure it to the metal fence behind it using this little loop, to prevent Brownie from pulling it down on herself.

When it’s closed it’s just a little pad that looks like a mini-deck. I threw some mulch around it but I’m working on some ideas to pretty-up the dirt all around it. Probably some plants on the right side, and maybe some stepping stones in front.

I’m not gonna lie…Brownie still likes to play in the piles of dirt. Maybe a little less now?

Sorry about the lack of house posts this week, folks. We’ve got a couple of projects on the backburner and they’re just taking a while to get to the point where they merit a post. I’m really excited about them though and think they’ll have a big impact on our space.

Here’s a quick little update on the status of the yard. We recently added these new patio chairs. They’re from Kmart, of all places, and they were only $13 each, on sale! My husband is really good at finding deals like this.

The new chairs are nice and comfy. They’re obviously not the highest quality things, but they are comparable to thirty-dollar chairs at Target or Home Depot, so I’m ok with the price we paid! They replace these grody things:

The whole patio set was a hand-me-down from Chris’ parents. It was awesome, still sturdy and functional, but the chairs had seen better days. There was a ton of discoloration from sitting out in the sun for years, and it didn’t improve despite my attempts to bleach them out.

I finally got Chris to agree that we should get new ones. Now that we have nice chairs out there, I actually sit out there more! I’ll watch the baby running around the yard while I have my morning coffee.

The paint on the table is badly chipping and we’re planning to scrape it down and spray paint it. Guess what color we’re going to go with?

We also installed a new hose reel this week. Suddenly the hose, which was lying coiled on the patio, is gone, and we have so much more usable space! It’s the little things…

Boy, we really need to get the outside of the house repainted. Sigh. That’s what happens when you buy a fixer. You have to live with peeling paint until you get around to it…which could be months or years. Be warned!